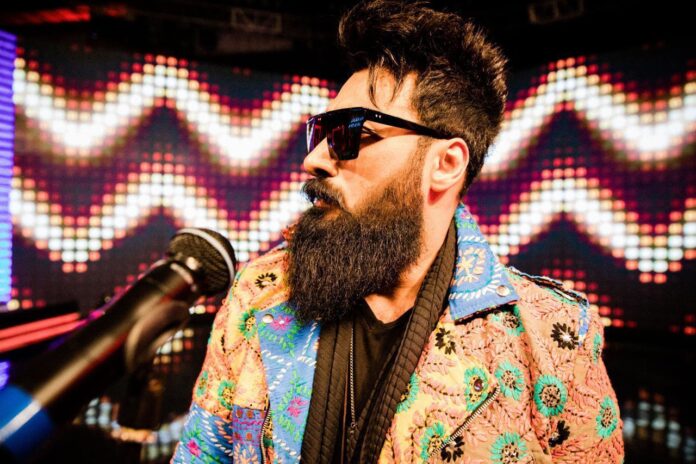 Rockstar Umair Jaswal has had quite the year with several accolades up his sleeve. Most recently, with Raahi being a major hit across the country and beyond, the musician also had great success with his fresh rendition of the Alamgir song ‘Gagar’. He has continued to show his talents in multiple ways whether it be through his vocals, writing, style, or motorbike adventures, the man surely knows how to keep an audience engaged and entertained.

He has made his presence known time and again by creating work we all love to see and hear. The rockstar has impressed viewers worldwide with his multifaceted skill-set on full display this year. Being exceptionally talented in his craft, Jaswal has surely made his mark in the industry with one successful venture after the other.

Umair Jaswal’s year started with his original track ‘Chal Raha Hoon’ winning Song Of The Year at the first-ever Pakistan International Screen Awards. The track was written as an ode to a past loved one and has an emotional feel while providing a soulful sound.

The song resonated with people across the nation and beyond the border. Fans were swept away by the heartfelt lyrics and the authentic expression the song conveys.

This was followed by the successful launch of his fashionable athleisure wear clothing brand REVAMP, which brings quality clothing at an affordable price to the people of Pakistan. Where it’s rare to find international standard of clothing and a good price, Jaswal decided to take matters into his own hands by launching a brand which would be accessible for all. The singer has also developed his own gym named ‘ALPHA’ in order to promote fitness and living a healthy lifestyle in general.

Earlier this year in August, Umair Jaswal launched his writing and production debut series, ‘Raahi’. The show featured Jaswal himself on a motorbike, riding through several cities within the country while meeting old friends, giving a brief history of each location and highlighting the rich culture which encapsulates Pakistan’s most beautiful destinations. The series was instantly successful as it showed the country through Jaswal’s eyes while keeping up with an international standard of cinematography.

A total of 8 hard-hitting episodes were broadcasted on multiple television channels, leading to a powerful response from audiences.

The series also features several of Jaswal’s original tracks, further solidifying the impact of its production. His writing for the series has been commended by many and was critically acclaimed by all top publications in the country. ‘Raahi’ has now officially been submitted for two international awards.

Following the groundbreaking success of his series, Jaswal’s latest track ‘Gagar’ made waves all over the internet. The song was so successful that it gauged up to 4 million views in only 2 days.

Being an instant hit, several fans got their dancing shoes on and created their own rendition of the Gagar dance with the Gagar kick switched over with a dab. The track trademarked the hashtags, #GagarKick and #GagarFever.

Fans are still posting their own dances to the song and have continued to jam to its groovy beats since it first released. Gagar is also the most tagged song of the year and the most searched song on all music streaming platforms.

Umair Jaswal continuously sets the bar high by being one of the most celebrated people in the industry right now and his back to back hits have shown true creative mastery in every endeavor. Jaswal’s latest song ‘Har Funn Maula’ officially released earlier this month in collaboration with folk and Sufi singer Sanam Marvi. The song is about one’s search for God and could be categorized as a Sufi Dhamal track with elements of rock n roll.

The composition features two of Pakistan’s most iconic music producers, Rohail Hyatt and Shuja Haidar (who was also the lyricist and composer of the track). The trio made an excellent combination, making this powerful song come to life. ‘Har Funn Maula’ marks Umair Jaswal’s most number of appearances on Coke Studio, he shares this with Atif Aslam and Rahat Fateh Ali Khan.

Progressively making his mark as a natural talent, we just can’t wait to see what the rockstar does next!