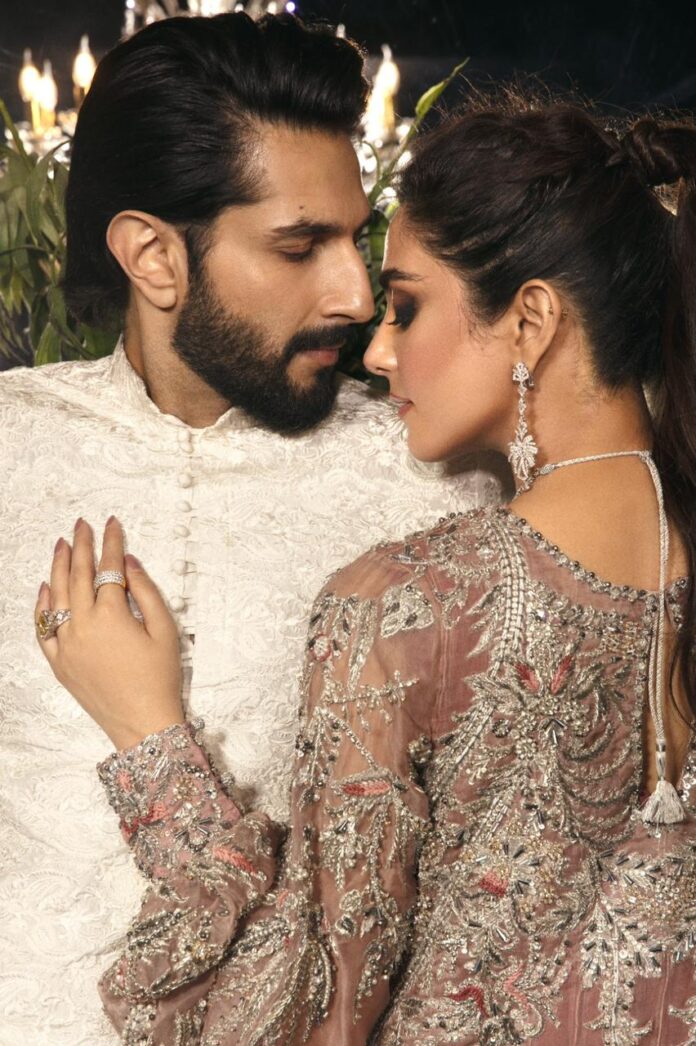 The niche of Pakistani couture is quite a difficult realm to wrap one’s head around, but those who have a grounding in fashion, present consistent collections year on year, learn and perfect the craft of bridal couture become much sought after design houses, whose order books are filled up well into the next six months.

One such designer who has been a frontrunner in the world of fashion in the nation and undeniably given the moniker of the King of Couture, is Hassan Sheheryar Yasin (HSY) — who continues the legacy of his ingenious design sensibility with his latest collection, Khayaal.

Revealing the collection in a number of sneak peaks and exclusive reveals, there are still a plethora of enticing details which fans of the designer know a little of, and things that truly make this HSY exclusive couture one for the annals of craft history.

Read on to find out more…

HSY has almost worked like a bridge between the world of fashion and the realm of entertainment, and thus, one could always be hopeful for a celebrity to be an iconic part of his latest campaigns. This time around, the couturier has taken an even more creative angle and gone with a fashion film featuring the romantic chemistry between two of Pakistan’s most wanted stars of today, Maya Ali and Bilal Ashraf. While Bilal has been a staple in the HSY family, his pairing with Maya adds yet another glamorous quotient to the bigger picture.

HSY brides are synonymous with intricate designs and a particular colour palette, but this time, the couturier has taken it a notch above by introducing Khayaal as a one-stop solution to all trousseau needs. Whether the blushing bride opts for the perfect demure Nikkah ensemble in jewel toned hues, a Mehndi outfit in vibrant shades, a signature silver HSY tone for the Baraat, or a moonlit inspired Valima jora that shimmers, every betrothed couple is spoilt for choice at the new towering atelier that houses bespoke, formal, groomwear and the latest lines to come off the floor.

There’s a wide array of ‘firsts’ in this ornate collection by HSY, and that includes ensembles that are inspired by the moon-lit hues of the night where the silver shadows shimmer amidst twilight in all their glory. The designer has taken a step away from the colours he has come to be known for, such as reds, and instead presented a homage to jewel tones, pastels and metallic shades – indicating a new direction for the House of HSY.

A Master Stroke in Cuts & Silhouettes

HSY as a couturier, has dominated the market for more than two decades, and has introduced a number of cuts and silhouettes to his discerning clientele that they now associate exclusively with him. Taking this forward and innovating further for the prospective customer’s plethora of needs, HSY has introduced a wide variety with Khayaal.

Be it long, straight shirts with nuanced slits, lehenga cholis done up in a bespoke Subcontinental style or even a front open Bolero jackets, there’s perfection in each piece de resistance crafted under HSY’s contemporary signature style.

That’s not all, however, as the designer has gone on even further to make Khayaal a running success. There’s a focus on other cuts and silhouettes as well, and one can find diverse styles such as the gota-work gharara pants and one piece gowns in the collection too.

There’s royalty, and then there’s HSY royalty. With Khayaal, the designer plays with the idea of elevating the ethos of South Asian heirloom and heritage inspired ensembles as he transforms them into regal pieces of art. Like a rebirth of Pakistani craft, where heritage, heirloom and the ornate fuse together, HSY plays with a number of traditional craft such as working with oxidised golds and silver, gota, mukaish and pitta work, along with other odes to global and regional embellishments such as French knots, zanjeeri, 3D hand-made flowers, and stone work as well- creating the perfect amalgamation between contemporary innovations and age-old techniques.

For a clientele that understands HSY’s mission to highlight traditional craft of the Subcontinent and add his own flair to the mix, Khayaal plays the perfect role this wedding season!

There’s absolutely no other who could compare to the intricacies the couturier presents, and that’s a fact!