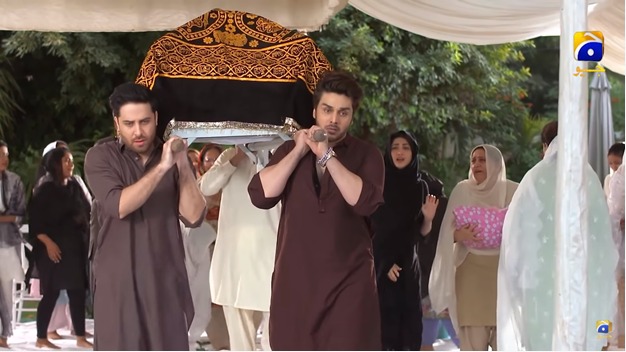 7th Sky Entertainment’s ‘Qayamat’ has kept viewers on their toes right from the very beginning. With interesting characters placed around a strong premise and unexpected twists on regular intervals, it has kept the drama trending week after week.

This week’s episodes 14 & 15 were high on emotions and witnessed a tragic turn of events that has left fans waiting impatiently for the upcoming episodes.

In episode 14, the heated argument between Samrah (Amar Khan) and Rashid (Ahsan Khan) resulted in another act of domestic violence.

Rashid pushed Samrah when she stopped him to meet Pari (Sana Fakhar). She falls, stomach-first, on the floor and is rushed to the hospital. The doctors succeed in saving the child but Samrah is declared dead due to maternal complications and losing a lot of blood.

While the entire family is devastated and cannot accept this loss; Rashid gets into a fight with Pari’s boyfriend.

The fight results in Pari’s boyfriend aiming a gun at Rashid, which is where Pari intervenes and accidentally gets shot instead.

Rashid is put behind bar but gets a bail as Pari survives. Jawad (Haroon Shahid) finally takes Rashid back home where they break the news about Samrah’s death to him.
Fayyaz (Noor-ul-Hassan) seeks permission from Rashid to take the newly born baby girl, Sana, to their home.

After an argument, they decide that Ifrah (Neelam Muneer) would stay at their place to take care of the child. The episode concludes on a high note with Mukhtar (Shabbir Jan) scolding Rashid for all his bad deeds and Ifrah gets to know about it.

In episode 15, Ifrah blames Jawad for not taking care of her sister. She felt that whatever happened with Samrah was a way out of the physical and mental torture she was subject to on a daily basis. Samrah’s parents, on the other hand, feel helpless and try their best to cope with their loss.

The family finally decides that Sana will live at Fayyaz’s house, and after a couple of months, she will return when Ifrah gets married to Jawad. Rashid’s stubborn and annoying attitude continues to grow as he doesn’t seem to be happy with this decision.

At this point, there is another twist in the tale when Nadra (Zainab Qayyum) advises Nargis (Saba Faisal) to convince Rashid to get married to Ifrah. This way, Sana will grow up with Ifrah being her stepmother, eliminating future threats of a stranger for a stepmother.

The narrative moves on and after five months, Rashid argues with his parents to bring back her daughter. Nargis utilizes this opportunity to the fullest and shares her idea of the marriage of Rashid and Ifrah with Mukhtar.

On the other hand, there are some sweet moments between Ifrah and Jawad that set the tone of the drama to a lighter mode. What comes as a surprise is that Rashid seeks an apology from Fayyaz and Afia for all his bad deeds which led to Samrah’s death.

Amar Khan’s role in ‘Qayamat’ comes to an end. She took the spotlight with her innocent looks and amazing dialogue delivery, pulling off a complex character effortlessly. Her display of emptions made a connection with the audience proving how easily she got into her character and made her performance all the more believable.

The dynamic duo, Abdullah Kadwani and Asad Qureshi’s drama serial ‘Qayamat’ is a must watch drama. What will happen next? Will Jawad accept the decision of their parents and sacrifice the love of his life? Will Ifrah agree to marry Rashid? We will have to wait and watch!

If you haven’t watched these emotion packed episodes yet, what are you waiting for?

KASB’s KTrade raises $4.5m to get Pakistanis to invest in Pakistani...

Bonanza Satrangi partners up with Muzaffarabad Tigers in KPL