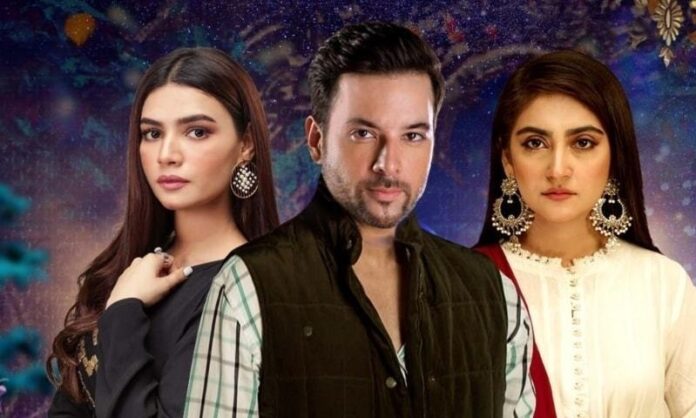 7th Sky Entertainment’s Ramz-e-Ishq has been making waves ever since it went on air. This family-oriented play continues to rule the hearts of drama viewers with its intense storyline, ensemble cast, and high-quality production.

The story is a mix of emotions and heartbreak, encompassing a childhood love story and many other complications. It is set up in a contemporary Nawab family and depicts the authentic lifestyle of royal households.

The lead characters are played by Hiba Bukhari (Roshni), Mikaal Zulfiqar (Rayan), and Kiran Haq (Rania) who are caught up in a love trio.

Rania is married to Rayan, and so is Roshni, but Roshni and Rayan’s marriage and their upcoming baby was a secret to date, which got disclosed a few episodes ago. Rania is now furious over Roshni being pregnant with Rayan’s baby and can’t tolerate it.

Thirty episodes down, the drama is still going strong, leaving the audiences intrigued week after week. Though the entire play is full of many powerful scenes, here we are listing five best scenes from the drama.Rania Tries To Kill Roshni.

Rania, who has always been jealous of Roshni’s happiness, is now after her baby. In one of the recent episodes, she attempted to kill Roshni, but Rayan arrived in her room on the spot and stopped the mad girl from executing her evil plans. The scene was shot brilliantly, and Kiran Haq aced her antagonistic role in the scene. She made the audience cringe over her madness, and that’s what marks her success as a villain.

Rayan admitting that he is the Father of Roshni’s Baby
Another powerful scene was when Roshni was moral policed by Rania’s mother, Saffiya Aapa was forcing her to abort it. Poor Roshni was in a state of confusion and pity when Rayan arrived on the spot and gave a shut-up call to all questions once and for all. The way he publicly declared that he is the father of Roshni’s baby was very daring. Mikaal stole the show in that episode with his brilliant portrayal of a supporting and loving husband.

Mikaal Rescuing Roshni from Umar
Roshni’s ex-husband Umar is essayed by Gohar Rasheed in the drama. After months of divorcing Roshni, the clever man had kidnapped Roshni for financial gains. Though he didn’t succeed in his plotting, Roshni texted her location to Rayan, who reached the spot with police and rescued the love of his life from the shackles of the evil man.

Rania’s encounter with Umar in a shopping mall
In one of the episodes, Rania unexpectedly met Umar in a shopping mall and bribed him with lots of money asking him to take Roshni away with him despite getting to know that the two are divorced. This scene portrayed how low a jealous and self-centered woman can stoop so low in her hatred for someone.

Roshni’s first meeting with Nawab Hashmat Ali
This was the best scene of the show. Roshni’s parents were disowned from the Nawab family due to their love marriage, but on the occasion of her wedding, her father heartily wished to reunite with his family. Roshni tried to fulfill her father’s wish by going all alone to Nawab Hashmat Ali’s haveli and begged him to forgive his father. Although she was severely humiliated by her grandfather in that scene, the scene had its impact on the audience. It showed true love between a father and a daughter.
With the drama now close to an end, we can’t help but appreciate the unique story that we got to watch on our TV screens!