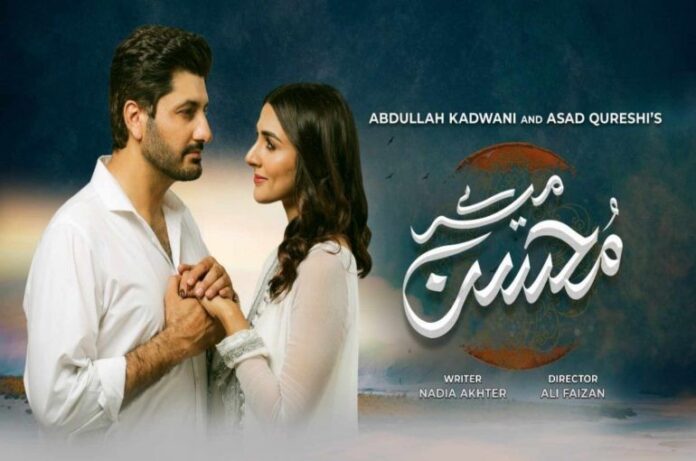 By Kanza Kamran: Mere Mohsin’s last episode has finally aired and honestly, we are going to miss that show. It was an incredibly different story with impeccable actors like Syed Jibran, Saba Hameed, and Rabab Hashim who nailed their characters, and delivered the story with such profoundness that the audience stayed hooked to the screens throughout the whole drama.

The last episode finally aired and the show ended on a happy and beautiful note. Here’s a quick run-down of everything that happened. After Soha gave birth to a beautiful baby boy, everyone in the family couldn’t contain their happiness.

During all the celebrations, Mohsin told Khursheed Begum that Soha’s parents wanted him to take responsibility of their business as they are settling in Europe, this left Khursheed Begum in a state of skepticism. We have seen in previous episodes that she is so protective for her children, and this is indeed a big responsibility for Mohsin and it would feel like Mohsin had married Soha just for her wealth.

At one moment Khursheed Begum couldn’t help but break down thinking about all the scenarios that will be perceived if Mohsin takes over the company.

Mohsin sensed that ever since he talked to his mother she was very disturbed and talked to Soha about it. Soha’s character has evolved beautifully, she very politely told Mohsin that even in her wildest dreams she wouldn’t separate him from his mother and Nazo.

In fact, this is one of our favorite moments from the episode when Soha and Mohsin talked to Khursheed Begum, easing all her worries and promised her that they would never leave her.

Khursheed Begum by the end seems satisfied and grateful that she couldn’t have found a better woman for Mohsin.

The ending note is extremely cute when all the family comes together to celebrate the birth of their son. This end marks as another brilliant production by 7th Sky Entertainment led by Abdullah Kadwani and Asad Qureshi.

The remarkable story-line had us hooked to our tv screens throughout its airing, and we are definitely going to miss watching Soha and Mohsin on our tv-screens.