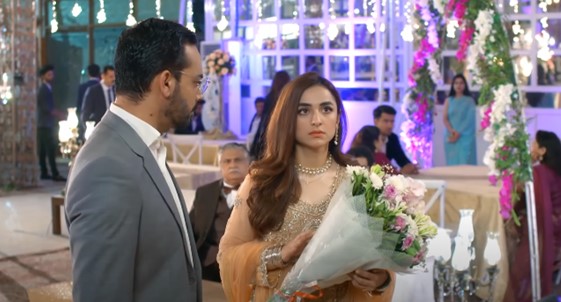 With the story at an exciting point in 7th Sky Entertainment’s Raaz-e-Ulfat, the drama had been trending on YouTube for quite some time now.

The struggle story of Mushk has deeply touched the audience – making it one of the top-most on-air dramas currently, as the audience eagerly waits for what is going to happen next after every episode. Currently, Raaz-e-Ulfat is hoarding the first three spots on YouTube trending, and that speaks a lot in itself.

Produced by Abdullah Kadwani and Asad Qureshi, who are not new to receiving this kind of response from most of their dramas – Raaz-e-Ulfat has also delivered far beyond anyone’s expectations.

The story that started as a story of rebellion and fights slowly took an unexpected turn that has till now managed to keep viewers glued to their screens.

Since the last episode had already been trending on YouTube, fans had been eagerly waiting to see the blooming love story between Mushk (Yumna Zaidi) and Ismail (Gohar Rasheed), who seem to be now sharing a lovely bond after all the hardships they had faced.

As for Sehba and Irtiza, who are now getting married after Sehba’s cunning plan has succeeded, things have already started falling apart on their end. At the end of the episode, we saw a glimpse of what Sehba’s future might look like from now on, after her real face is exposed to Irtiza.

All these twists, turns, and the unique plot has made Raaz-e-Ulfat one of the most viewed and critically acclaimed dramas on our TV screens at the moment. Abdullah Kadwani and Asad Qureshi have once again managed to steal the show – not only bringing GEO ahead in the TRPs race but also consecutively making it to the top on digital, which speaks for the realness and success of this drama itself.

For now, we can’t wait to see what would happen next in Mushk’s story. Raaz-e-Ulfat airs every Tuesday at 8 PM on GEO.

Kashan Hasan to head the entire Pakistan business at Reckitt

Cadbury honors every teacher with its new sweet TVC

Rabya all set to make her big screen debut with ‘Gawah...