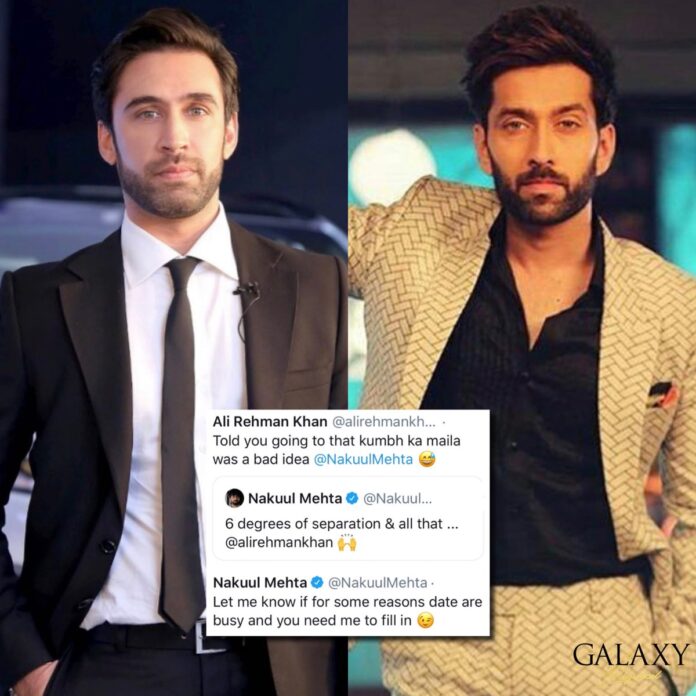 The actors shared a laugh on twitter over their ‘uncanny resemblance’ spotted by fans.  There is a new celeb look alike pair in town, and this time, the internet has stumbled upon an actor from across the border who looks strikingly like Ali Rehman Khan.

Recently, a twitter user posted a side by side picture of the Heer Maan Ja star and popular Indian actor, Nakul Mehta, commenting on how similar both the handsome actors look.

According to the user, both the good looking artists bear an uncanny resemblance to each other.

It wasn’t much later more fans joined in on the conversation, comparing features of the two handsome stars.

The comparison lead to a wholesome conversation between the two actors from across the border – that made the fans even happier. Nakul Mehta quoted the tweet first with the caption: “6 degrees of separation and all that…” and mentioning Ali Rehman Khan in it.

The Parchi star also immediately quoted Nakul’s tweet by saying: “Told you going to that Kumbh ka maila was a bad idea @NakuulMehta J” The Twitter exchange between the two talented actors came to an end with Nakul’s reply under Ali’s tweet saying: “Let me know if for some reasons date are busy and you need me to fill in” with a winking emoji.

Fans were amused with the jovial exchange between the two actors, praising their wit and the friendly way both the actors engaged with each other despite all the cross border drama that usually ensues between the two countries.

Nakul Mehta is a well-known Indian actor who has appeared in television shows and movies, and Ali Rehman Khan is one of the most popular leading men of our country at the moment, known for his charming personality, stylish looks, and impeccable acting skills